This summer while I was in Razecueillé, my grand-father little village in the French Pyrenees, I took the opportunity to craft an object from a wood trunk. Away from my digital fabrication machines and my computer, it was about making something in a more classic manner just to try.

In fact I had never done something like this and I hadn’t looked for information on the applicable techniques, just the pictures in the western movies where someone uses a knife to carve a figurine from a branch. The thing is that they do this to kill time!!! and it is not much efficient, but I will discover this later 😉

The objective is to make a mate recipient for Natalia, a mate addict as a good Argentinian!

So I started by the beginning, choosing a wood trunk at home and sawing it by hand with an approximate size for the recipient, of course leaving some margin in case I mess something up.

The next step was to empty the inside to create the concavity for the liquid. The wood in this country area is hard, chestnut, oaks and so on.

I think the trunk was oak, and really tough oak. I started very optimistic to carve with gauges that I had there. And I spent several ours with no real progress. This job would have been a neverending thing.

Then I got the suggestion to try a chisel, more effective but nevertheless the hole bottom was a mess of splinters and it was difficult to move in.

From there, the third try was quite effective. My father has a shed for his DIY hobby where he practices a lot of wood work, so I had plenty of tools. I moved in to the most effective system up to then, to use a drill with wood drill bits. And this allowed me to quickly empty the recipient inside by making many holes in it.

There was a problem though, the drill had no way to adjust the depth of the holes, and with all the chips accumulating I wasn’t able to see how deep I was going. So I ended up with holes at really different depths, and I was worried about this having in mind my objective was to make a uniform concavity.

At this point in time I was able to see how much wood I could spare, measuring form the deepest hole, and I made another cut with the saw to reduce the height.

Next steps, the sander. With one if this hardcore sanders thought to be used in big surfaces I sanded the bottom side to smooth it and also try to make it perpendicular to its vertical shape.

After that I had to deal with the outer and inner parts, and for this I used the Dremel, a rotary tool.

For the outer part I just had to sand a bit to get the bits and pieces of bark and any other irregularities, but I left some to keep some personality.

For the inside, I got a real fight! The wood was super strong inside and I had to make the inside bottom consistent dealing with all the irregular holes I made. I was not finding the correct tool for my Dremel. As the tool is rotary the majority of tools work laterally, but I need something to go straight inside. In the end I finished it with these spherical tools mainly, but spending plenty of hours:

With this I finished the recipient, after sanding it by hand with fine grain sanding paper.

I usually work with digital fabrication technology (3D printing, laser cutting and engraving, CNC routers), and it’s been some time since my partner Natalia asks me things in this style. Pacman wood ghosts, E.T. in 3D, her name painted, etc… check my Instagram to see those examples…

So the ideal decoration was clearly to make an E.T. Talking about E.T. by the way reminds me she recently watch the TV show Stranger Things and she loved it. I had already watched and I recommended it to her, and I watched it again, of course! A must watch if you love the movie icons from the 80s…

Back to the topic, for the outside what I liked best was just to engrave the wood, no paints. Just the engraved wood and the picture can be guessed.

I searched the Internet and I found this pic. If you look for “stencil” with whatever you are looking for you will find what you need to make it in two colors. In my case it was “et stencil”. 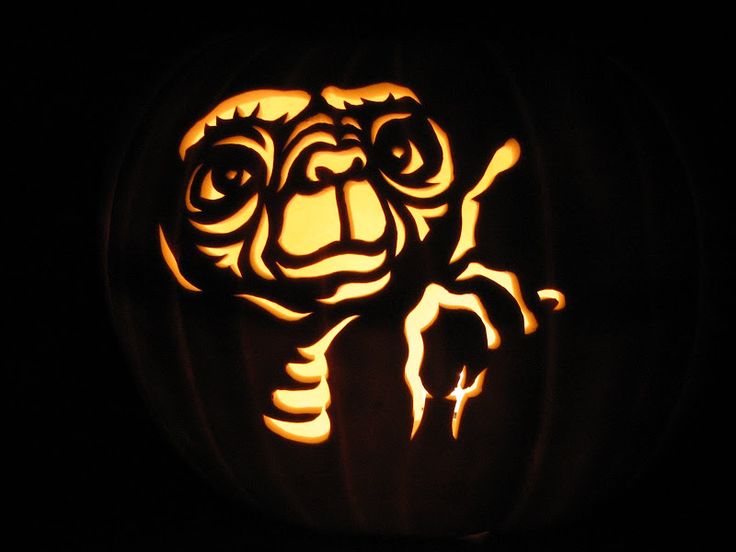 E.T. prepared to be carved from a pumpkin

Then I traced it as usual with the open source tool Inkscape. When you trace a bitmap into vectors you transform a picture in bitmap format which is a bunch of pixels into lines and curves. If you enlarge the first picture you loose resolution, and the image becomes pixelated, you see small squares instead of points, the more large the bigger.

However the vectorial image is a group of straight lines and curves that make up the image. If you enlarge it it keeps the relationship between those lines and curves and the surfaces they define so you can enlarge and shrink without loosing any resolution. It’s the ideal format for any later treatment. 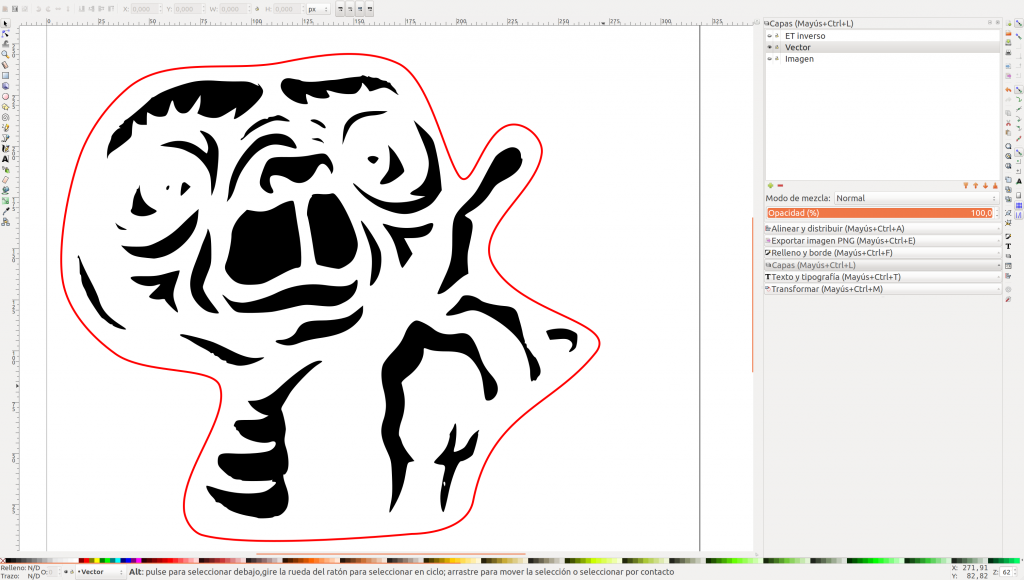 The result looks like this [I added the red line later by hand]. After that it is just a question of defining the document properties to the size you want, so in this case the recipient side, and scaling the vectors to this size. In this example the image was inverted, what shows in black should be white but to engrave on wood I thought it was going to be less painful and people would get it anyway.

Here comes the botched job. I have an engraving tool for my Dremel, so I thought I could use it by hand. I printed the image in the appropriate size, kept it stuck to the recipient with tape and started hands on.

I was short on time since Natalia was coming the day after, so I sped up. I just applied the engraving bit directly on paper, thinking that I would be able to eliminate easily the remaining black pieces of paper. But in fact I lost definition, in addition to the small definition the tool already had. So I was not seen properly where I was carving. 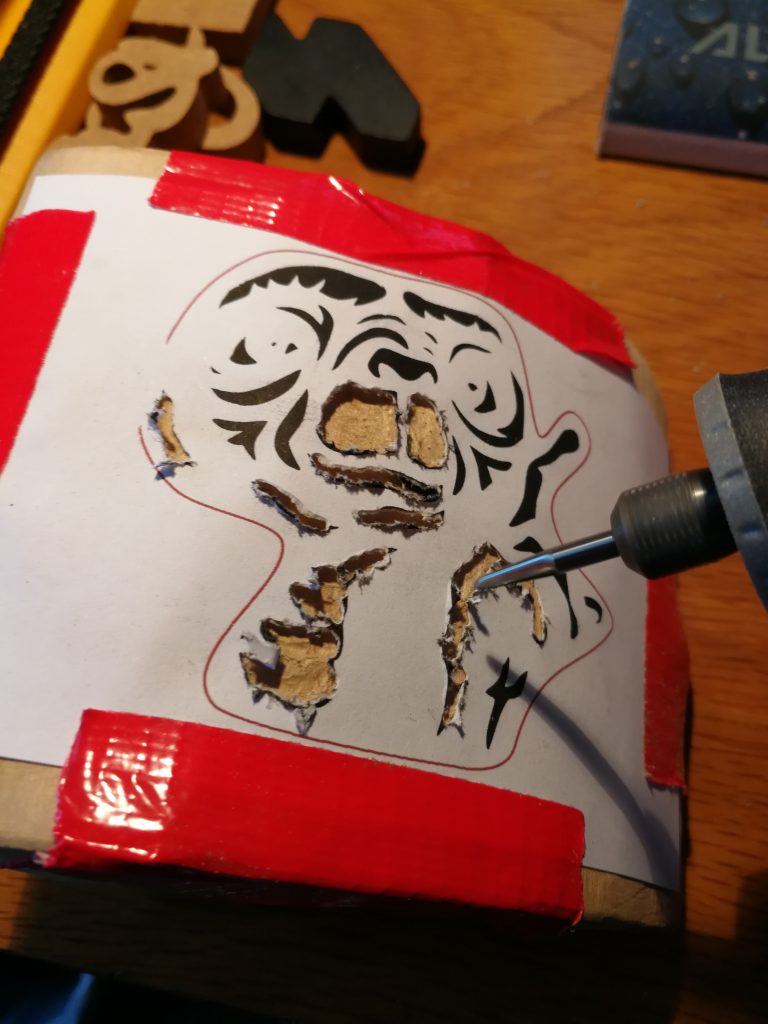 The result was quite tough. With plenty of imagination you could guess who it is, if you identify the long finger… 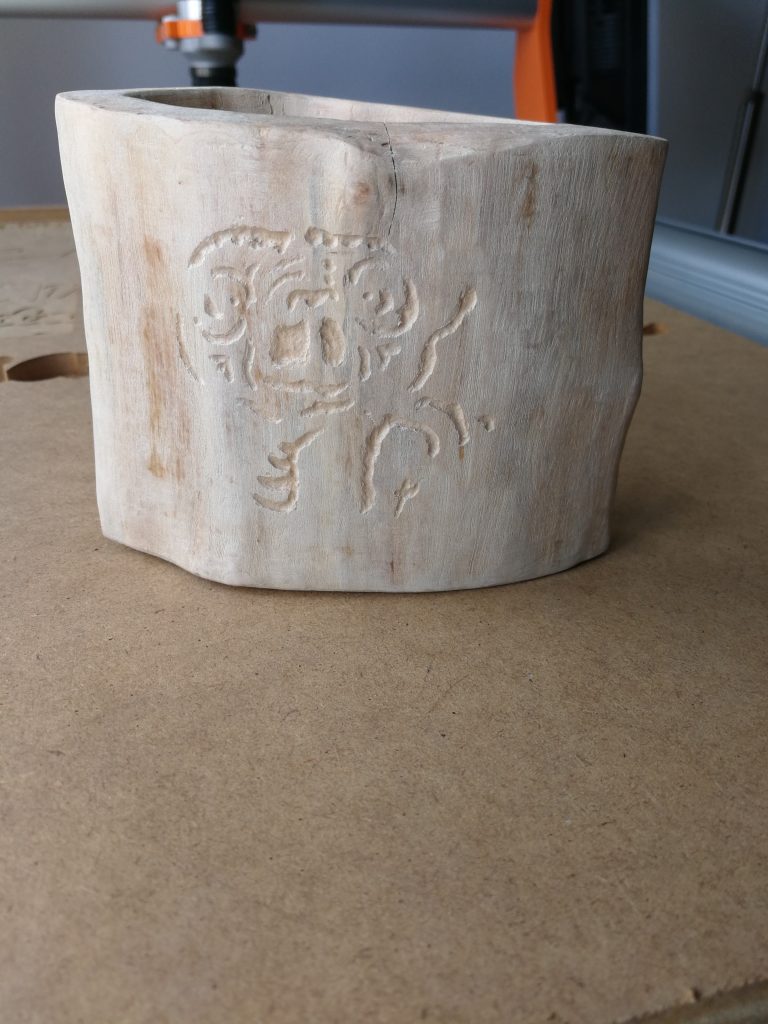 E.T. engraved on the recipient

It as not the result I expected in any case. So with Natalia we tried to save it, first thing was to paint in black the carved parts. But something was missing anyway, specially on eyes…Natalia got inspired and she added a moon and an “explanatory” 😛

It was still ok, but after that we tried to give a touch to the eyes, with a bit of blue. But it just was not fitting the eyes size and the shape so instead of an E.T. it looked more like Chucky! 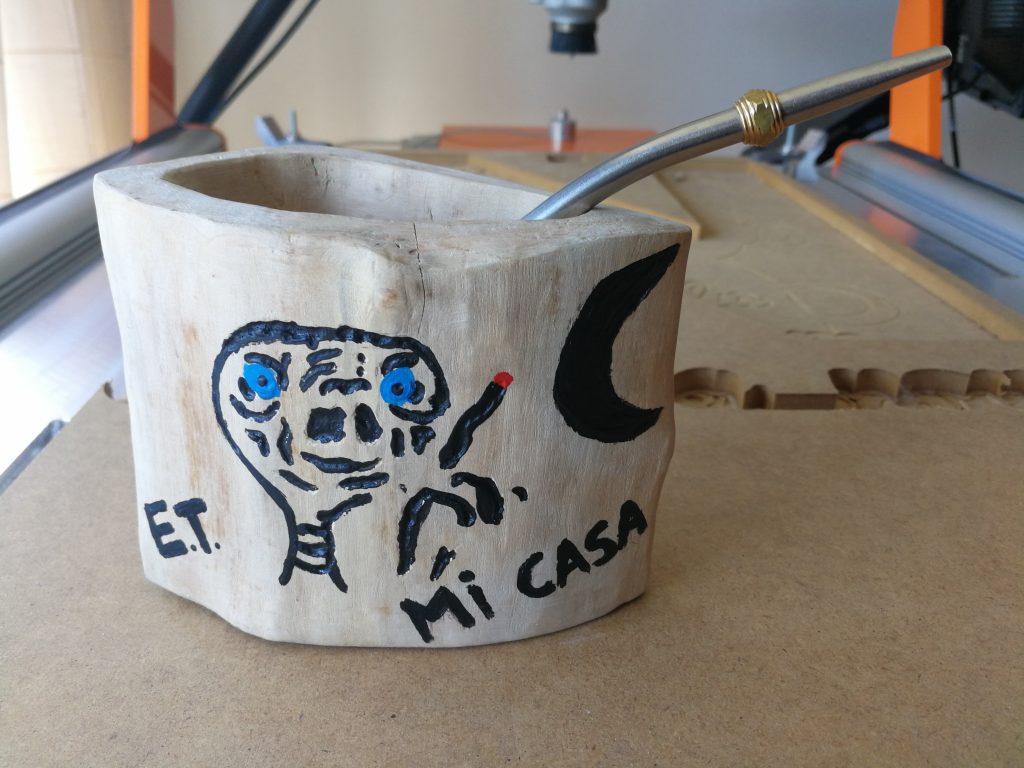 So nothing more here, undo and start again. In this case it was easy because we could sand it, it’s like the CTRL-Z but on wood as long as you have enough wood thickness haha.

This time we were going to do a transfer. I modified the vector image in Inkscape to invert it and got this: 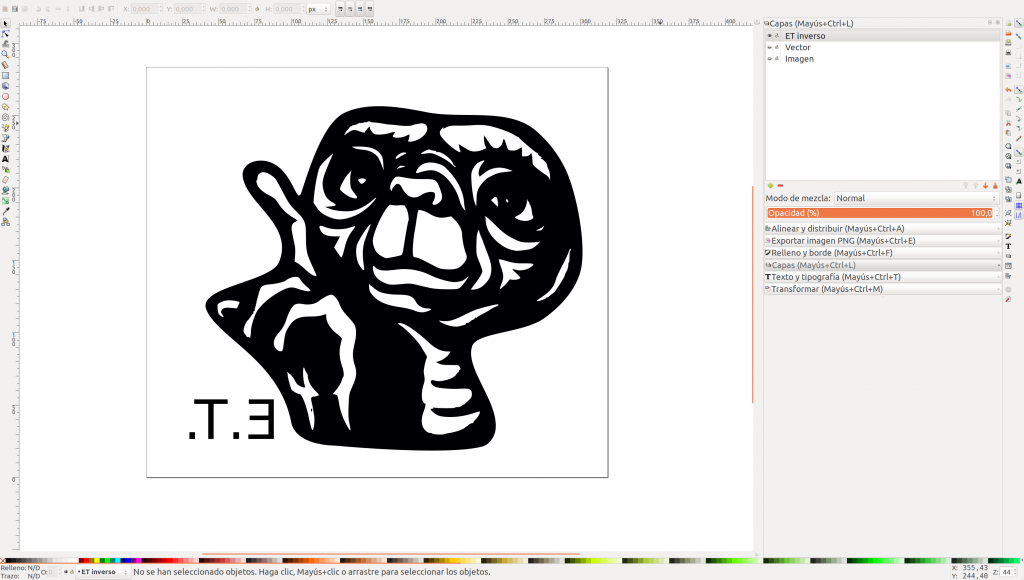 It’s just not black replaced by white, I also mirrored it. The transfer method is to apply the image in paper on top of the material where you want it to stick. It has to be printed with a laser printer, because the trick is that the toner powder sticks to the material below with a substance you add on top. That’s why you have to make a mirrored image to get it on the correct side once transferred. An horizontal flip does the job with Inkscape 😉

We also had problems with the transfer, because the surface was not flat. It was curved either in vertical and horizontal directions, and the paper was not staying stuck to the wood at some points, creating fails. I think Natalia tried something like seven times. She had a “magic” pen for transfer that she had already used some time ago and I think it was not working as well as the first day. The usual way is a liquid you apply on top of paper. But I believe the problem was mainly due to the curves.

After these attempts and the “Undo” sanding afterwards, Natalia finally decided  to paint it with a pen on top of the messed transfer using it as a guide. 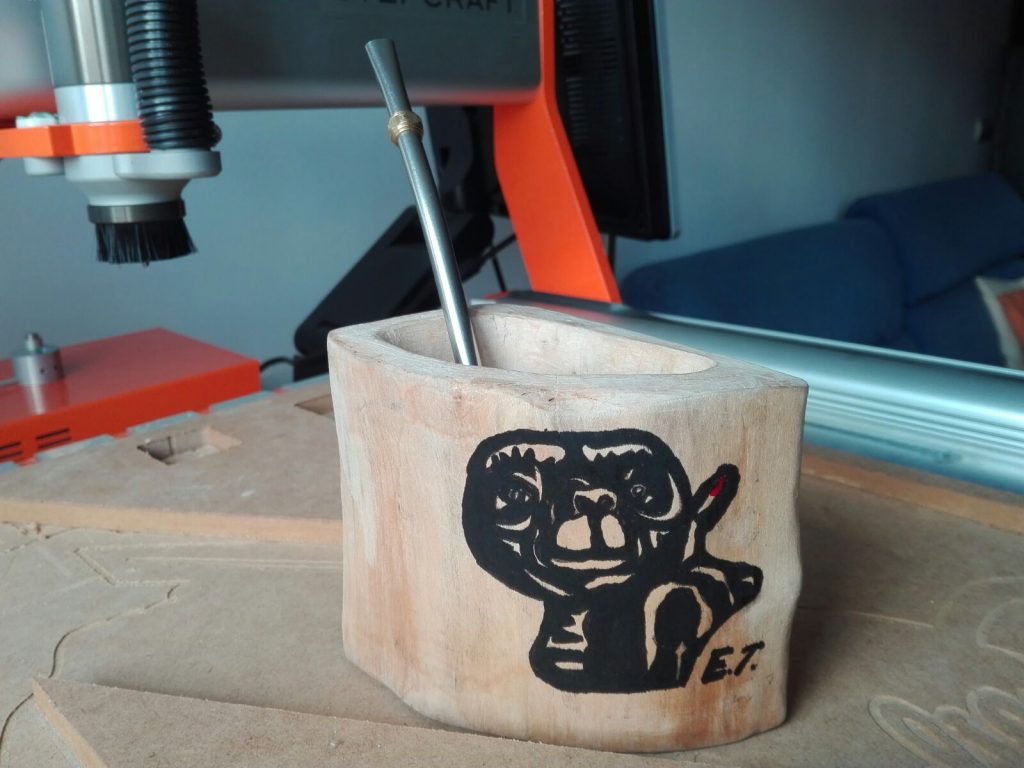 It was a bit off from the center after so many tries, but there is no doubt it is E.T., otherwise just read the text next to it!! 😛

After this she applied a layer of spray lacquer just in the outside, and now we just have to treat the wood inside having in mind that it will be exposed to hot water and yerba when she uses it.

Well, we learned plenty of things:

Here is an an example of a transfer made by Natalia with a nicer result: 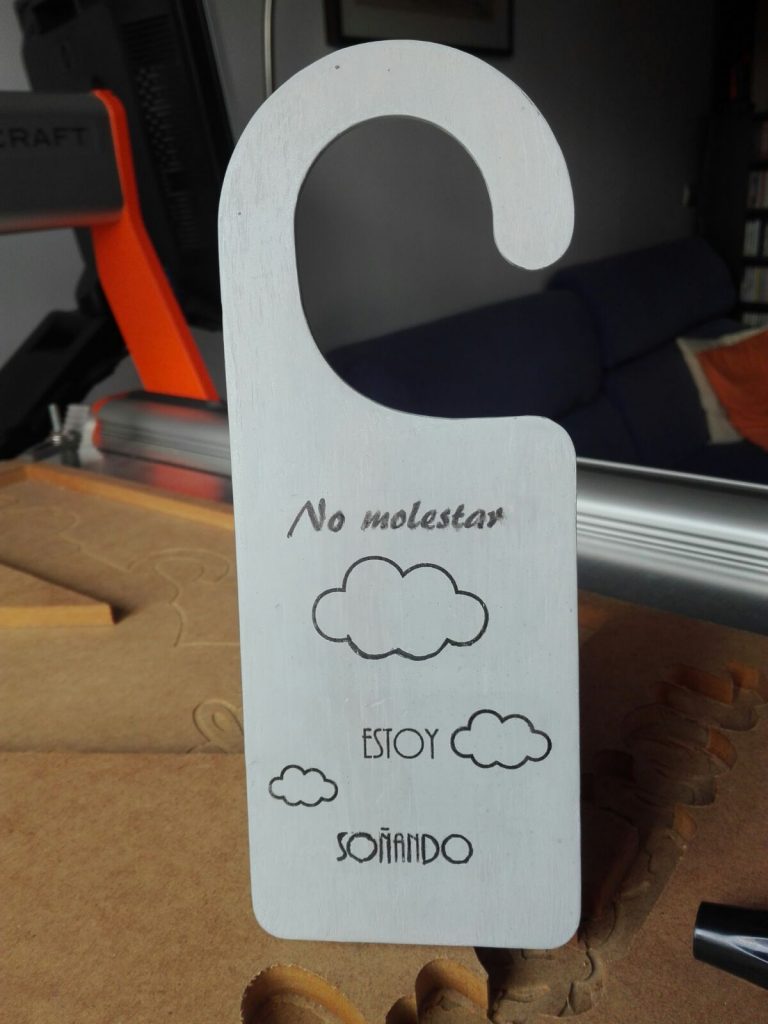 I will be exhibiting at the Printer Party

If you follow me for some time you will know that I am the founder of 3D Print Barcelona group. And we organize the Printer Party to be held on Saturday October, 28th. A full day event we make every year dedicated to 3D printing and other digital fabrication techniques used by makers. You have more details and the agenda schedule on the web. It covers all levels of knowledge from those who want to know about the topics to those that are pretty involved, with workshops for all ages, presentations and exhibition.

I am mentioning this because in addition of being there as organizer, I will also have a stand exhibiting some of the stuff I make and other I will prepare for this day, helped by Natalia.

I am mainly focused in decoration objects and/or geek stuff in wood or 3d printed, usually customized, and painted or not at your wish. A bit of everything 😀